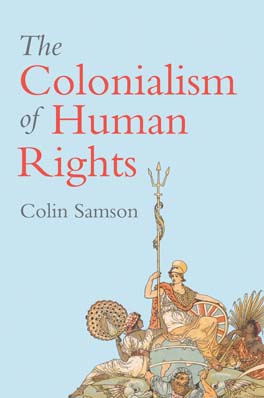 The colonialism of human rights

This trenchant book brings human rights into conversation with the histories and afterlives of Western colonialism and slavery. Colin Samson examines the paradox that the nations that credit themselves with formulating universal human rights were colonial powers, settler colonists and sponsors of enslavement. Samson points out that many liberal theorists supported colonialism and slavery, and how this illiberalism plays out today in selective, often racist processes of recognition and enforcement of human rights.

To reveal the continuities between colonial histories and contemporary events, Samson connects British, French and American colonial theories and practice to the notion of non-universal human rights. Vivid illustrations and case studies of racial exceptions to human rights are drawn from the afterlives of the enslaved and colonized, as well as recent events such as American police killings of black people, the treatment of Algerian harkis in France, the Windrush scandal in Britain and the militarized suppression of the Standing Rock Water Protectors movement. Advocating for reparative justice and indigenizing law, Samson argues that such events are not a failure of liberalism so much as an inbuilt racial dynamic of it.