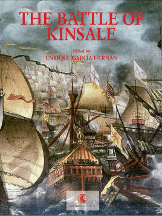 The Battle of Kinsale

All battles have been fought for power, but only a few have been waged to secure control of a society. The fighting at Kinsale in the first weeks of 1602 can be said to be one of those that resulted not only in changes in the military, diplomatic and political configuration of the time, but also in the very structure of society that emerged in its aftermath. Other great battles in the early modern period – Pavia (1525), Mohacs (1526), Lepanto (1571) and Rocroi (1643) – led to changes in the military, diplomatic and political authority of the states involved in them (for this reason, historians tend to set them within the paradigm of ‘the rise and fall’ of the ‘great powers’). These confrontations were therefore supremely important events, which had far-reaching repercussions in their respective spheres of impact (Italy, Hungary, the Mediterranean and, in the case of Rocroi, the balance of power in western and central Europe).

Kinsale is rather different. The defeat of the Spanish expeditionary force and the Irish Gaelic nobles who came to support it would lead to a series of profound political, cultural and even ethnic changes in Ireland. As a direct result of Kinsale, the English government would press ahead with an ambitious programme for the transformation of Ireland whose basis was the eradication of the Gaelic culture of the people, the emasculation of the traditional ruling elites and the implantation of a new class of landowners. It is no simplification to say that the English victory in January 1602 would transform Ireland, and in doing so would unleash forces which remain discussed – and profoundly controversial – to this day: the legacy of English rule; the resonance of Gaelic culture; the historical links between Spain and the Catholic Irish; the Irish diaspora across the Atlantic world in the course of the seventeenth, eighteenth, nineteenth and twentieth centuries.

Even without taking into account its consequences, the Battle of Kinsale was a remarkable event for a number of reasons. It was the only engagement fought by Spanish troops on the soil of the British Isles in the sixteenth, seventeenth and eighteenth centuries. Philip III of Spain (1598-1621) intended that his soldiers and officials would not only fight against the forces of Elizabeth I of England (1558-1603), but also that they would act to improve the social and religious circumstances of the civilian population in the region where they settled. The King’s plan was that his commanders would provide money to the Irish nobles in order to fund an army which they would recruit and lead. The expedition was therefore an extraordinary social and military experiment: it was designed as not only a mission of humanitarian assistance, but also as an attempt to recruit, pay, provision and equip foreign subjects to fight against a ruler whose legitimacy had been called into question and rejected by her own subjects.

The Spanish-Irish force was defeated by the English army at Kinsale, and the legacy of this reverse has sometimes been said to have shaped all subsequent Irish history. Yet the campaign offers insights not only into political events, diplomatic developments and military systems, but also tells us a great deal about contemporary attitudes to legitimacy, honour and duty. This volume brings together documents gathered as a result of a decade of intensive archival research. The letters, memoranda and inventories reproduced in it serve to improve and deepen our understanding of this pivotal event. They are accompanied by a scholarly study which sets out the new interpretations that are transforming our understanding of the events at Kinsale and the culture that produced them.