Is it necessary and just that parliamentarians are immune from legal action? If so, to what extent is such immunity justified and which purpose does it serve? These questions reveal a constitutional dilemma. On the one hand, parliamentary immunity safeguards the necessary independence of the legislature. It protects members of parliament from politically motivated legal action and facilitates freedom of parliamentary debate. On the other hand, however, it distorts equality before the law, limits the rights of citizens and obstructs the administration of justice. This dilemma touches the very core of constitutional law. Immunity rules are intimately linked to the basic setup of the democratic state, to the separation of powers, the concept of representation, the rule of law and fundamental rights. This book contains a comprehensive study of parliamentary immunity in the United Kingdom, France and the Netherlands. It explores and compares the material legal rules as well as the historical and theoretical background of the three systems with a view to identifying common norms and principles. It also takes into account the -European dimension of parliamentary immunity by placing the national immunity systems in the context of the relevant case law of the European Court of Human Rights and providing an analysis of the immunity regime of the European Parliament. While no universal blueprint for parliamentary immunity is in sight, this book demonstrates that a common legal understanding of the function and purpose of immunity is slowly emerging. 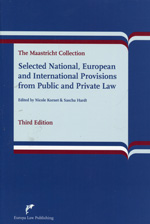