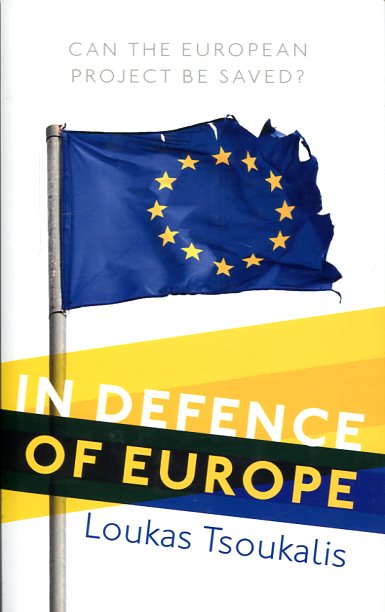 In defence of Europe
can the european project be saved?

Europe has not been so weak and divided for a long time. Buffeted by a succession of crises, it has shown a strong collective survival instinct but a poor capacity to deliver. In times when the tectonic plates are shifting and tension between global markets and national democracies is rising, can Europe hold together, under what termsand indeed for what purpose? The euro crisis has left big scars and is not over yet. Economic divergence has grown between and within countries, leading in turn to political fragmentation and the rise of populism. And growth remains slow, fragile, and uneven. Europe is in a bind: it is difficult to go forwards and scary to go backwards. In between, it is an unhappy and unstable state of affairs. Looking further afield, a more assertive Russia and an imploding neighbourhood may not even allow Europe the luxury to decline in grace. A convinced European and familiar with the world of Brussels, Loukas Tsoukalis is critical of the way Europe has handled its multiple crises in recent years. He addresses the key issues and difficult choices facing Europe today. Can Europe collectively manage globalization, combine growth with inclusive societies, and reconcile its apparent yearning for soft power with the often hard reality of the world outside? Individual countries cannot handle these challenges on their own. While knowing full well the difficulties in reaching a common European stance, Tsoukalis is also acutely aware of the consequences of failure.