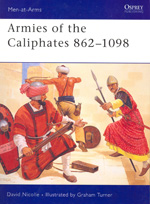 Illustrated by Graham Turner. The 8th century heralded the start of a golden age in the history of the Islamic world. At this time, the Sunni Muslim 'Abbãsid Caliphate, with its capital at Baghdad, ruled virtually the entire Islamic world. Islamic military power peaked in the 9th century, but by the end of this golden age in the 11th century, the 'Abbãsid Caliphs had little political and virtually no military power. Featuring numerous photographs of artefacts and eight full colour plates by Graham Turner, David Nicolle's book examines the recruitment, organization, weaponry and uniforms of the armies of the Caliphates from 862-1098.