Women, family and society in Byzantium

Angeliki Laiou (1941-2008), one of the leading Byzantinists of her generation, broke new ground in the study of the social and economic history of the Byzantine Empire. "Women, Family and Society in Byzantium", the first of three volumes to be published posthumously in the "Variorum Collected Studies Series", brings together eight articles published between 1993 and 2009. Demonstrating Professor Laiou's characteristic attention to the relationship between ideology and social practice, the first five articles concern the status of women as evidenced through legal, narrative, hagiographical, and archival sources, while the final three investigate conceptions of law and justice, the vocabulary and typology of peasant rebellions, and the form and evolution of political agreements in Byzantine society. 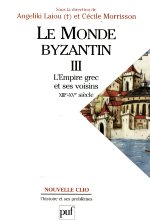