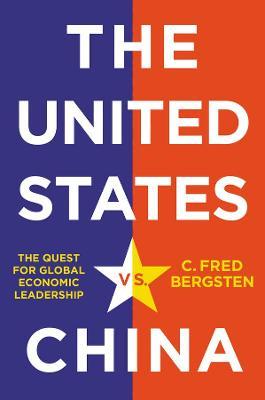 The United states vs. China
the quest for global economic leadership

After leading the world economy for a century, the United States faces the first real challenge to its supremacy in the rise of China. Is economic (or broader) conflict, well beyond the trade and technology war that has already erupted, inevitable between the world’s two superpowers? Will their clash produce a new economic leadership vacuum akin to the 1930s, when Great Britain was unable to play its traditional leadership role and a rising United States was unwilling to step in to save the global order?

In this sweeping and authoritative analysis of the competition for global economic leadership between China and the United States, C. Fred Bergsten warns of the disastrous consequences of hostile confrontation between these two superpowers. He paints a frightening picture of a world economy adopting Chinese characteristics, in which the United States, after Trump abdicated much of its role, engages in a self-defeating attempt to “decouple” from its rival. Drawing on more than 50 years of active participation as a policymaker and close observation as a scholar, Bergsten calls on China to exercise constructive global leadership in its own self-interest and on the United States to reject a policy of containment, avoid a new Cold War, and instead pursue “conditional competitive cooperation” to work with its allies, and especially China, to lead, rather than destroy, the world economy.

PART I: The Setting

6 America’s Will to Lead

7 The Leadership Vacuum: A G-0 World?