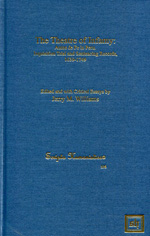 Sentencing records (relaciones) of auto-de-fe trials served to alert citizens to the crimes committed against the Church and state by individuals who might otherwise have remained accidental to history; likewise they served as a warning to deter the populace against ill conduct. The relaciones bring into relief ideological questions that the Inquisition considered worthy of scrutiny. Individually and collectively the records of autos de fe document the life and circumstances of individuals judged to have either questioned the status quo be it religious, social or moral or strayed from it, individuals whose conduct or values brought them into contest with the norm of the larger society. Those published accounts became a literary novelty and part of the daily theatre of life, with conversations about them reflected in the popular vernacular. Within an an Ibero-American context Williams examines cases of religious intolerance and contrasting political ideologies, explores how to teach inquisition texts, and provides a framework for reading and understanding an auto record. This unique volume of selected texts from the colonial archive documents varying aspects of inquisitorial procedures, the architecture of sentencing records, and contains a wealth of information about the otherwise quotidian existence of citizens of Peru of diverse class, race, and ethnic circumstances who struggled to mediate the complexities of life against the structure of colonial rule.

Edited and with critical essays by Jerry M. Williams.