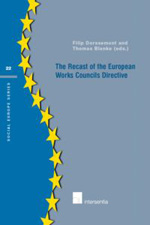 The recast of the european works Council Directive

Eds. Filip Dorssemont, Thomas Blanke. On 16 May 2009, the EC Directive 2009/38 (Recast Directive) was published in the Official Journal. With effect from 6 June 2011, the EC Directive 94/45 on the establishment of a European Works Council or a procedure in Community-scale undertakings and Community-scale groups of undertakings for the purposes of informing and consulting employees (EWC Directive) will be repealed. It will be substituted by the Recast Directive. The present volume is retrospective and prospective. The book unfolds as a diptych. The first part examines the background and some of the loopholes of the EWC Directive. The background is being studied from a conceptual, a historical, a legislative and a case law perspective. A substantial part of the first panel of the diptych is dedicated to an analysis of the ECJ and domestic case law related to the EWC Directive. This research was operated on the basis of national reports following a questionnaire or format annexed to the book. The national reports (Austria, Belgium, France, Germany, the Netherlands, Slovakia, Sweden and the UK), which have been updated until the end of 2009, as well as a comparative or synthetic report have been integrated in this publication. The second part does not endeavour a systematic analysis of the Recast Directive. It gathers selected essays which have been written by distinguished scholars as well as by experts who have combined a profound knowledge of law in the books with the experience of law in practice. Some of the essays have a topical character. They focus on specific improvements of the Recast Directive (the scope ratione temporis, the nature of the recast procedure, the definitions of information and consultation, the issue of continuity, the articulation between European and local information and consultation procedures). Other authors have tackled the subject matter in a more comprehensive manner, though they have done so from a specific and distinct perspective (e.

The European Convention on Human Rights and the employment relation