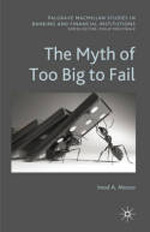 The myth of too big to fail

'Too big to fail' has become a household expression. Governments the world over have insisted that taxpayers need to bailout failing financial institutions on the grounds that not doing so would induce a crisis of even greater scale in the entire economic system. But is there any merit in this claim? In this new book, Imad Moosa argues that there is no evidence to support it. He examines the origins and evolution of the 'too big to fail' claim, tracing it to the political influence of the financial sector rather than any law of economics. He puts forward many arguments against the contention, maintaining that this is a myth that we would be better off without. He goes on to offer other, more persuasive, solutions to overcoming the problems that have landed so many parts of the world in such dire straits. This is a book that no citizen whose taxes are funding national bank bailouts can afford to ignore.

The theory and empirics of exchange rates