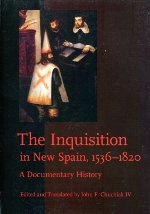 The Inquisition in New Spain. 1536-1820
a documentary history

The Inquisition! Just the word itself evokes, to the modern reader, endless images of torment, violence, corruption, and intolerance committed in the name of Catholic orthodoxy and societal conformity. But what do most people actually know about the Inquisition, its ministers, its procedures? This systematic, comprehensive look at one of the most important Inquisition tribunals in the New World reveals a surprisingly diverse panorama of actors, events, and ideas that came into contact and conflict in the central arena of religious faith. Edited and annotated by John F. Chuchiak IV, this collection of previously untranslated and unpublished documents from the Holy Office of the Inquisition in New Spain provides a clear understanding of how the Inquisition originated, evolved, and functioned in the colonial Spanish territories of Mexico and northern Central America. The three sections of documents lay out the laws and regulations of the Inquisition, follow examples of its day-to-day operations and procedures, and detail select trial proceedings. Chuchiak's opening chapter and brief section introductions provide the social, historical, political, and religious background necessary to comprehend the complex and generally misunderstood institutions of the Inquisition and the effect it has had on societal development in modern-day Mexico, Guatemala, El Salvador, Nicaragua, and Honduras. Featuring fifty-eight newly translated documents, meticulous annotations, and trenchant contextual analysis, this documentary history is an indispensable resource for anyone seeking to understand the Inquisition in general and its nearly three-hundred-year reign in the New World in particular.