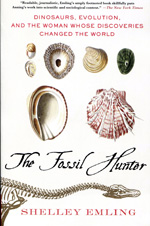 The fossil hunter
dinosaurs, evolution, and the woman whose discoveries changed the world

In 1811, when she was only twelve years old, Mary Anning discovered the first dinosaur skeleton - of an ichthyosaur - while fossil hunting on the cliffs of Lyme Regis. Mary, the child of a poor family, became a fossil hunter, selling her discoveries and attracting the attention of fossil collectors and eventually the scientific world. Until Mary's discovery, it was widely believed that animals did not become extinct. But the bizarre nature of the fossils Mary found made it impossible to ignore the truth, sparking the conversation about evolution carried on by scientists from Charles Darwin to Stephen Jay Gould.