The end of the West
the once and future Europe

Has Europe's extraordinary postwar recovery limped to an end? It would seem so. The United Kingdom, Belgium, France, Italy, and former Soviet Bloc countries have experienced ethnic or religious disturbances, sometimes violent. Greece, Ireland, and Spain are menaced by financial crises. And the euro is in trouble. In "The End of the West", David Marquand, a former member of the British Parliament, argues that Europe's problems stem from outdated perceptions of global power, and calls for a drastic change in European governance to halt the continent's slide into irrelevance. Taking a searching look at the continent's governing institutions, history, and current challenges, Marquand offers a disturbing diagnosis of Europe's ills to point the way toward a better future. Exploring the baffling contrast between postwar success and current failures, Marquand examines the rebirth of ethnic communities from Catalonia to Flanders, the rise of xenophobic populism, the democratic deficit that stymies EU governance, and the thorny questions of where Europe's borders end and what it means to be European. Marquand contends that as China, India, and other nations rise, Europe must abandon ancient notions of an enlightened West and a backward East. He calls for Europe's leaders and citizens to confront the painful issues of ethnicity, integration, and economic cohesion, and to build a democratic and federal structure. A wake-up call to those who cling to ideas of a triumphalist Europe, "The End of the West" shows that the continent must draw on all its reserves of intellectual and political creativity to thrive in an increasingly turbulent world, where the very language of "East" and "West" has been emptied of meaning. In a new preface, Marquand analyzes the current Eurozone crisis - arguing that it was inevitable due to the absurdity of combining monetary union with fiscal disunion - and raises some of the questions Europe will have to face in its recovery. 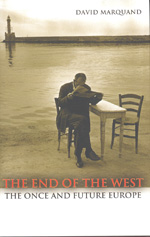 The end of the West