The development and testing of Heckscher-Ohlin trade models

No names are more closely associated with modern trade theory than Eli Heckscher and Bertil Ohlin. The basic Heckscher-Ohlin proposition, according to which a country exports factors in abundant supply and imports factors in scarce supply, is a key component of modern trade theory. In this book, Robert Baldwin traces the development of the HO model, describing the historical twists and turns that have led to the basic modern theoretical model in use today. Baldwin not only presents a clear and cohesive view of the model's evolution but also reviews the results of empirical tests of its various versions.Baldwin, who published his first theoretical article on the HO model in 1948, first surveys the development of the HO model and then assesses empirical tests of its predictions. Most discussions of empirical work on HO models confine themselves to the basic theorem, but Baldwin devotes a chapter to empirical tests of three related propositions: the Stolper- Samuelson theorem; the Rybczynski theorem; and the factor price equalization theorem. He concludes that the formulation and testing of these later models have improved economists' understanding of the forces shaping international trade, but that many empirical trade economists (himself included) were so enamored of the elegant but highly unrealistic factor price equalization models developed from the insights of Heckscher and Ohlin that they have neglected investigation of other models without this relationship. 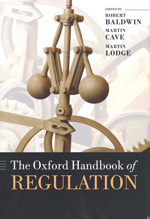 The Oxford handbook of regulation