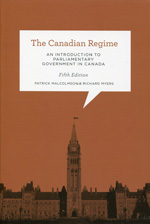 The canadian regime
an introduction to parlamentary government in Canada

Lucid and comprehensive, The Canadian Regime provides a unique analysis of Canada's political regime by challenging readers to think of the political system as an organic entity where change in one area inevitably ripples through the rest of the system. The book's focus on the inner logic of parliamentary government explains the rationale for Canada's relatively complex political system.The new edition includes analysis of the 2011 federal election and the implications of a return to majority government rule. Discussions of the Constitution, Charter, Senate reform, and judicial appointments are all updated, and new material is provided on the prorogation controversy, voter turnout, equalization payments, and prime ministerial government. The Canadian Regime continues to provide the most accessible introduction to the institutions, processes, and principles of the Canadian political system.