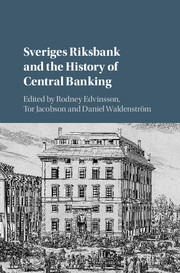 Sveriges Riksbank and the history of central banking

Written in celebration of its 350th anniversary in 2018, this book details the history of the central bank of Sweden, Sveriges Riksbank, as presented by Klas Fregert. It relates the bank's history to the development of other major central banks around the world. Chapters are written by some of the more prominent scholars in the field of monetary economics and economic history. These chapters include an analysis of the Bank of England written by Charles Goodhart; the evolution of banking in America, written by Barry Eichengreen; a first account of the People's Bank of China, written by Franklin Allen, Xian Gu, and Jun Qian; as well as a chapter about the brief but important history of the European Central Bank, written by Otmar Issing.

Contains a compilation of twelve central bank historiographies covering the world's largest and most important institutions
Compares monetary policy responses of central banks in times of crisis, serving as lessons from history about how to tackle economic and financial crises
Offers the first history of the People's Bank of China