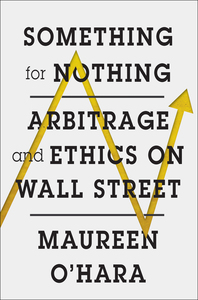 Something for nothing
arbitrage and ethics on Wall Street

From a leading financial economist, a searching examination of the ethics of modern finance.

In 2001, Goldman Sachs structured a complex financial contract so that its client, the government of Greece, would appear to have far less debt than it actually did. When news of this transaction came out years later, the inevitable question arose: Even though Goldman’s actions were legal, were they ethically wrong? Is modern finance itself inherently unethical?

In Something for Nothing, financial economist Maureen O’Hara explains that one of the key innovations of modern finance is its reliance on arbitrage, the practice of taking advantage of a price difference between two or more markets to generate profits and remove inefficiencies. When done correctly, arbitrage can create value at little or no cost (in effect, getting “something for nothing”); but it can also be an exploitative tool.

In a lucid, insightful discussion of the ethics of arbitrage in modern finance, O’Hara reveals how the rules can often be stretched into still-legal yet highly unethical business practices. Examining key cases in clear and persuasive prose, O’Hara illuminates various aspects of financial ethics, from the Goldman Greek transaction to Lehman Brothers’ attempt to cover up its debt, JPMorgan Chase’s maneuvers in California’s energy markets, Bernie Madoff’s trading strategies in the 1980s, high-frequency trading practices, and toxic loans in France.

Ultimately, O’Hara turns to philosophy and religion to argue for a new, humanistic approach to ethics in the financial industry. She makes a strong case for a way forward: fewer rules and more standards to foster a morally responsible outlook. Fearlessly raising the questions at the moral heart of our financial system, Something for Nothing is a masterful treatise on the ethics of modern finance.