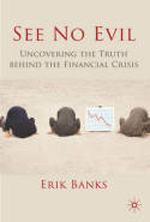 See no Evil
uncovering the truth behind the financial crisis

We are doomed to experience further financial crises in the future, because money is powerful, bankers clever, political will malleable, and memories short. So argues Erik Banks in this brilliant book, which tells the story of the recent global economic crisis in the words of the main players in the drama. Banks shows how few bankers, regulators and politicians saw the crisis coming, and how they believed its effects would be containable when it began. When realization kicked in, they all began to compensate by talking loudly and designing populist knee-jerk measures which seemed only to deal with the specifics of preventing another crisis exactly like that which had already occurred. The form of future crises was barely thought about. Banks's reconstruction of the crisis, and the demonstration that so few substantive lessons have been learnt, is essential reading for anyone interested in our current predicament.

The simple rules of risk 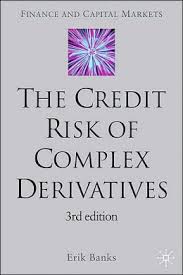 The credit risk of complex derivatives