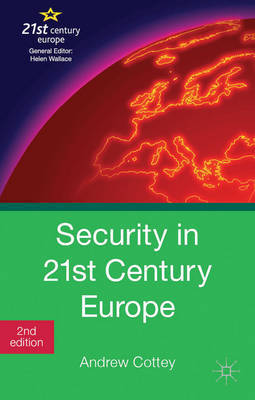 Europe's traditional problem of war between states is being displaced by a new and equally daunting set of security challenges. While major war within Europe remains unlikely, the 2008 Georgia war and the 2011 Libya war were reminders that violent conflicts are still prevalent on Europe's periphery and can pose major challenges for European governments, NATO and the EU. At the same time, terrorism, nuclear proliferation as well as non-military problems like mass migration and climate change threaten Europe's security. Fully revised and updated, the second edition of this leading text provides a systematic assessment of security in contemporary Europe. The book examines the changing character of security and assesses the extent of the threats posed by different challenges, as well as the policy dilemmas involved in responding to these concerns. The nature of security in Europe has been transformed in recent years. Andrew Cottey argues that this is a result of two key developments: the emergence of a security community - a zone of peace where war is inconceivable across much of Europe - and the presence of new security threats such as terrorism and energy dependence. Set in the context of the rising power of non-Western states and the continuing fall-out from the global economic crisis, this text provides a comprehensive analysis of Europe's new security challenges.

Security in the new Europe