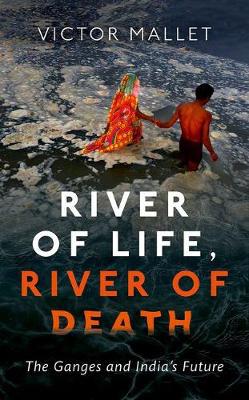 River of life, river of death
the Ganges and India's future

India is killing the Ganges, and the Ganges in turn is killing India. The waterway that has nourished more people than any on earth for three millennia is now so polluted with sewage and toxic waste that it has become a menace to human and animal health. Victor Mallet traces the holy river from source to mouth, and from ancient times to the present day, to find that the battle to rescue what is arguably the world's most important river is far from lost. As one Hindu sage told the author in Rishikesh on the banks of the upper Ganges (known to Hindus as the goddess Ganga) - 'If Ganga dies, India dies. If Ganga thrives, India thrives. The lives of 500 million people is no small thing.' Drawing on four years of first-hand reporting and detailed historical and scientific research, Mallet delves into the religious, historical, and biological mysteries of the Ganges, and explains how Hindus can simultaneously revere and abuse their national river. Starting at the Himalayan glacier where the Ganges emerges pure and cold from an icy cave known as the Cow's Mouth and ending in the tiger-infested mangrove swamps of the Bay of Bengal, Mallet encounters everyone from the naked holy men who worship the river, to the engineers who divert its waters for irrigation, the scientists who study its bacteria, and Narendra Modi, the Hindu nationalist prime minister, who says he wants to save India's mother-river for posterity. Can they succeed in saving the river from catastrophe - or is it too late?.