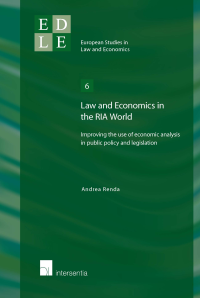 The use of economics in public policy, in the form of ex ante Regulatory Impact Analysis (RIA), is strongly advocated by international organizations such as the OECD and the World Bank. In the US and the EU, hundreds of RIAs are produced every year to justify public intervention in the form of regulation. But reality shows that in many other countries the adoption and implementation of this tool has been patchy at best. At the same time, the economics used in RIA is heavily challenged by scholarly developments such as behavioral economics, neuroeconomics and the study of social norms, and was also unable to predict and cure the financial crisis that hit the global economy in 2007. The book claims that RIA should incorporate recent developments in the law and economics literature and provides an analysis of the potential contribution of positive, normative and functional schools of law and economics to the practice of RIA. The book contains thematic applications to policy fields such as environmental protection, energy efficiency, financial markets, antitrust, cyberspace and telecommunications.

The book provides far-reaching recommendations on the future of law and economics, as well as on the organization of RIA systems around the world, particularly in the US and the EU.