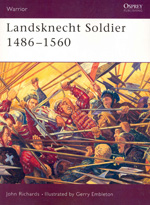 Illustrated by Gerry Embleton. The Landsknecht (meaning 'servant of the country') flourished during a key period for military organisation and practice. In the late 15th century, the Holy Roman Emperor, Maximilian I, recruited thousands of mercenaries from Central and Northern Europe, with the aim of creating a reliable source of men for his armies # and the Landsknecht were born. This book reveals the true-life experiences of the Landsknecht soldier, using numerous first-hand accounts. It takes a close look at the recruitment, training, daily life and and careers of these formidable soldiers, and examines in detail their clothing, equipment and weaponry. Many fine, contemporary illustrations, some drawn by Landsknecht themselves, accompany the text. Contents: Introduction · The Origins of the Landsknecht · Organisation · Recruitment · Army life · The Articles of War · Officers · Camp life · The Train · Sickness · Religion · Costume ·The Landsknecht in their Own Words · The decline of the Landsknecht · Bibliography · Colour Plate Commentary · Index