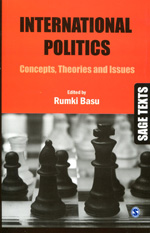 The study of international politics has become truly global in nature and scope, as the world stands politically organised in nearly two hundred nation states at the beginning of the second decade of the 21st century. The globalisation of political economies and the 'internationalisation' of the nation state system is the most characteristic feature of the 21st century. This book provides a roadmap that can orient the reader towards the main concepts, theories and issues in world politics today necessitating explorations in 'new theorizing', thus making the study of global politics a much more exciting and absorbing project than ever before. Every effort has been made to understand the 'new' vocabulary, concepts, debates and discourses in the theory and practice of international relations and global politics today. Each chapter provides an analytical overview of the issues addressed, identifies the central actors and perspectives, outlines past progress and future prospects. Model questions and suggestions for further reading additionally enrich the text.