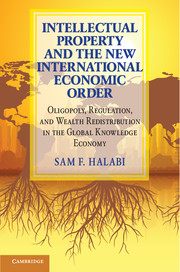 In economic sectors crucial to human welfare – agriculture, education, and medicine – a small number of firms control global markets, primarily by enforcing intellectual property (IP) rights incorporated into trade agreements made in the 1980s onward. Such rights include patents on seeds and medicines, copyrights for educational texts, and trademarks in consumer products. According to conventional wisdom, these agreements likewise ended hopes for a 'New International Economic Order,' under which wealth would be redistributed from rich countries to poor. Sam F. Halabi turns this conventional wisdom on its head by demonstrating that the New International Economic Order never faded, but rather was redirected by other treaties, formed outside the nominally economic sphere, that protected poor countries' interests in education, health, and nutrition and resulted in redistribution and regulation. This illuminating work should be read by anyone seeking a nuanced view of how IP is shaping the global knowledge economy.