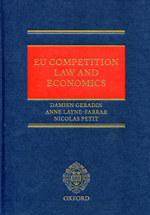 This is the first EU competition law treatise that fully integrates economic reasoning in its treatment of the decisional practice of the European Commission and the case-law of the European Court of Justice. Since the European Commission's move to a "more economic approach" to competition law reasoning and decisional practice, the use of economic argument in competition law cases has become a stricter requirement. Many national competition authorities are also increasingly moving away from a legalistic analysis of a firm's conduct to an effect-based analysis of such conduct, indeed most competition cases today involve teams composed of lawyers and industrial organisation economists. Competition law books tend to have either only cursory coverage of economics, have separate sections on economics, or indeed are far too technical in the level of economic understanding they assume. Ensuring a genuinely integrated approach to legal and economic analysis, this major new work is written by a team combining the widely recognised expertise of two competition law practitioners and a prominent economic consultant. The book contains economic reasoning throughout in accessible form, and, more pertinently for practitioners, examines economics in the light of how it is used and put to effect in the courts and decision-making institutions of the EU. A general introductory section sets EU competition law in its historical context. The second chapter goes on to explore the economics foundations of EU competition law. What follows then is an integrated treatment of each of the core substantive areas of EU competition law, including Article 101 TFEU, Article 102 TFEU, mergers, cartels and other horizontal agreements and vertical restraints.

The WTO and global convergence in telecommunications and audio-visual services