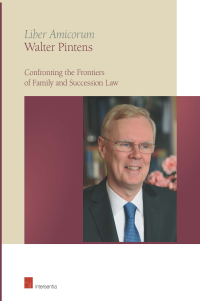 On the occasion of his admission to emeritate status, Professor Dr. Walter Pintens’ many friends and colleagues in Belgium and from around the globe are presenting him with a Liber Amicorum entitled Confronting the Frontiers of Family and Succession Law. It reflects the broad academic and societal activities of Professor Pintens. Walter Pintens studied law at the Universities of Leuven, Tübingen and Munich and was awarded his doctoral degree by the University of Leuven for an award-winning comparative dissertation on divorce by mutual consent. As professor at the Law Faculty of the University of Leuven, he taught courses on family property law, comparative family law, notarial law and comparative law. As Honorarprofessor at the Saarland University in Saarbrücken, he teaches European private law. He was visiting professor in Freiburg, Berlin, Pretoria and Cambridge.
Professor Pintens’ numerous publications cover family property law as well as family law, notarial law, comparative law and private international law. In these areas he was editor, co-editor, chairman and a member of the editorial boards of several Belgian and international series and journals such as Rechtskundig Weekblad, the Patrimonium series, the European Family Law series, Family and Succession Law in the International Encyclopaedia of Laws, the Zeitschrift für das gesamte Familienrecht and the Zeitschrift für Europäisches Privatrecht. His reference book Familiaal Vermogensrecht is widely praised. These activities resulted in memberships of different Belgian and international academic associations. Professor Pintens is, among others, the vice-president of the German Wissenschaftliche Vereinigung für Familienrecht, a founding member of the Commission on European Family Law and an associate member of the Académie Internationale de Droit Comparé in Paris.
In addition to his academic activities, Professor Pintens is also well-acquainted with legal practice. For 25 years he has been sitting as Honorary Justice of the Peace in Leuven, was twice appointed as member of the Board for the Recruitment of the Judiciary by the Belgian Senate and is a member of the scientific committee of the Judicial Training Institute. In recognition of his outstanding career Prof. Pintens was elected Secretary General of the International Commission on Civil Status, an intergovernmental organisation based in Strasbourg.