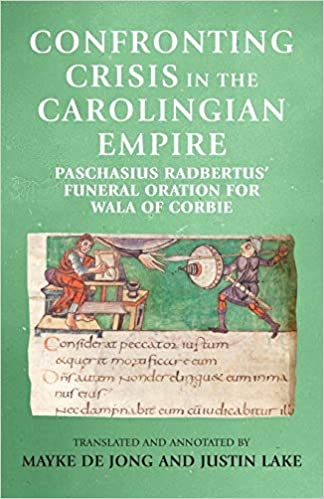 This book presents a new translation of the Epitaphium Arsenii by Paschasius Radbertus (Radbert), a monk of Corbie. A daring defence of Charlemagne’s cousin Wala, onetime abbot of Corbie, the Epitaphium is about ideals of religious and political leadership, articulated by an author who was an actor in his own narrative.

To newcomers and seasoned scholars alike, Radbert offers a fascinating window onto a rapidly changing Carolingian world. Wala, who was nicknamed ‘Arsenius’ after a late-antique monastic pioneer, played a leading part in the two rebellions against Louis the Pious in 830–3, before dying in exile in 836. In a now-hostile political climate, Radbert set about repairing Wala’s damaged reputation. His manuscript, which takes the forms of a spirited conversation between himself and several fellow monks, tells us much about the values of the Carolingian leadership, while bearing witness to life and learning in a great royal abbey.

Radbert’s Epitaphium deserves to be better known, and should become a major resource as a teaching text on Carolingian politics. The translators, renowned scholars of Carolingian history and Latin philology, make the challenging Latin original accessible to both students and specialists. They also provide a comprehensive commentary and footnotes dealing with the historical and intellectual context and language, which are important contributions to scholarship in their own right.