Applying the dismal science
when economists give advice to governments

In this exciting collection, Iain McLean and Colin Jennings bring together some of the most eminent social scientists to have advised British governments since 1964. Successive chapters show what went wrong in UK economic policy making in the 1960s and 1970s, what goes better now, and what still goes wrong. The editors explain how recent developments in economic theory have improved economic policy making. Contributors include two former Chief Economic Advisers at HM Treasury, and the co-designer of the successful '3G spectrum auction'.

The fiscal crisis of the United Kingdom 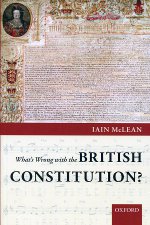 What's wrong with the British Constitution?