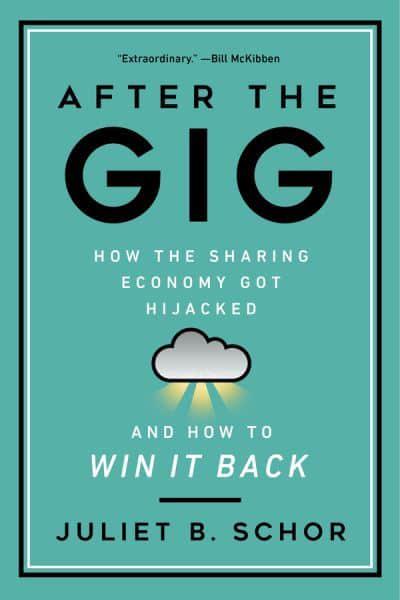 The dark side of the gig economy (Uber, Airbnb, etc.) and how to make it equitable for the users and workers most exploited.

When the "sharing economy" launched a decade ago, proponents claimed that it would transform the experience of work-giving earners flexibility, autonomy, and a decent income. It was touted as a cure for social isolation and rampant ecological degradation. But this novel form of work soon sprouted a dark side: exploited Uber drivers, neighborhoods ruined by Airbnb, racial discrimination, and rising carbon emissions. Several of the most prominent platforms are now faced with existential crises as they prioritize growth over fairness and long-term viability.

Nevertheless, the basic model-a peer-to-peer structure augmented by digital tech-holds the potential to meet its original promises. Based on nearly a decade of pioneering research, After the Gig dives into what went wrong with this contemporary reimagining of labor. The book examines multiple types of data from thirteen cases to identify the unique features and potential of sharing platforms that prior research has failed to pinpoint. Juliet B. Schor presents a compelling argument that we can engineer a reboot: through regulatory reforms and cooperative platforms owned and controlled by users, an equitable and truly shared economy is still possible.

Introduction : the problem of work --
From the cyber-culture to "we are the Uber of x" --
Earning on the platforms --
Shared, but unequal --
"The shared economy is a Lie" --
Swapping with snobs --
Coops and commons, and democratic sharing.