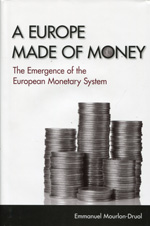 A Europe Made of Money is a new history of the making of the European Monetary System (EMS), based on extensive archive research. Emmanuel Mourlon-Druol highlights two long-term processes in the monetary and economic negotiations in the decade leading up to the founding of the EMS in 1979. The first is a transnational learning process involving a powerful, networked European monetary elite that shaped a habit of cooperation among technocrats. The second stresses the importance of the European Council, which held regular meetings between heads of government beginning in 1974, giving EEC legitimacy to monetary initiatives that had previously involved semisecret and bilateral negotiations. The interaction of these two features changed the EMS from a fairly trivial piece of administrative business to a tremendously important political agreement.
The inception of the EMS was greeted as one of the landmark achievements of regional cooperation, a major leap forward in the creation of a unified Europe. Yet Mourlon-Druol's account stresses that the EMS is much more than a success story of financial cooperation. The technical suggestions made by its architects reveal how state elites conceptualized the larger project of integration. And their monetary policy became a marker for the conception of European identity. The unveiling of the EMS, Mourlon-Druol concludes, represented the convergence of material interests and symbolic, identity-based concerns.