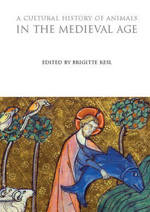 A cultural history of animals in the Medieval Age

Ed. Brigitte Resl. A Choice Outstanding Academic Title, 2008 A Cultural History of Animals in the Medieval Age investigates the changing roles of animals in medieval culture, economy and society in the period 1000 to 1400. The period saw significant changes in scientific and philosophical approaches to animals as well as their representation in art. Animals were omnipresent in medieval everyday life. They had enormous importance for medieval agriculture and trade and were also hunted for food and used in popular entertainments. At the same time, animals were kept as pets and used to display their owner's status, whilst medieval religion attributed complex symbolic meanings to animals. As with all the volumes in the illustrated Cultural History of Animals, this volume presents an overview of the period and continues with essays on the position of animals in contemporary symbolism, hunting, domestication, sports and entertainment, science, philosophy, and art. Volume 2 in the Cultural History of Animals edited by Linda Kalof and Brigitte Resl.