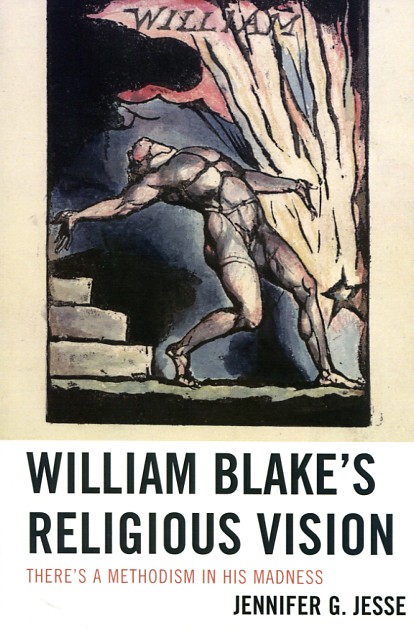 William Blake's religious vision
there's a methodism in his madness

In this innovative study, Jesse challenges the prevailing view of Blake as an antinomian and describes him as a theological moderate who defended an evangelical faith akin to the Methodism of John Wesley. She arrives at this conclusion by contextualizing Blake's works not only within Methodism, but in relation to other religious groups he addressed in his art, including the Established Church, deism, and radical religions. Further, she analyzes his works by sorting out the theological "road signs" he directed to each audience. This approach reveals Blake engaging each faction through its most prized beliefs, manipulating its own doctrines through visual and verbal guide-posts designed to communicate specifically with that group. She argues that, once we collate Blake's messages to his intended audiences-sounding radical to the conservatives and conservative to the radicals-we find him advocating a system that would have been recognized by his contemporaries as Wesleyan in orientation. This thesis also relies on an accurate understanding of eighteenth-century Methodism: Jesse underscores the empirical rationalism pervading Wesley's theology, highlighting differences between Methodism as practiced and as publicly caricatured. Undergirding this project is Jesse's call for more rigorous attention to the dramatic character of Blake's works. She notes that scholars still typically use phrases like "Blake says" or "Blake believes," followed by some claim made by a Blakean character, without negotiating the complex narrative dynamics that might enable us to understand the rhetorical purposes of that statement, as heard by Blake's respective audiences. Jesse maintains we must expect to find reflections in Blake's works of all the theologies he engaged. The question is: what was he doing with them, and why? In order to divine what Blake meant to communicate, we must explore how those he targeted would have perceived his arguments. Jesse concludes that by analyzing the dramatic character of Blake's works theologically through this wide-angled, audience-oriented approach, we see him orchestrating a grand rapprochement of the extreme theologies of his day into a unified vision that integrates faith and reason.