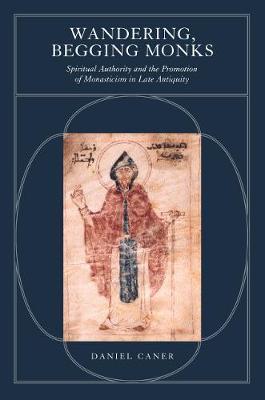 Wandering, begging monks
spiritual authority and the promotion of monasticism in Late Antiquity

An apostolic lifestyle characterized by total material renunciation, homelessness, and begging was practiced by monks throughout the Roman Empire in the fourth and fifth centuries. Such monks often served as spiritual advisors to urban aristocrats whose patronage gave them considerable authority and independence from episcopal control. This book is the first comprehensive study of this type of Christian poverty and the challenge it posed for episcopal authority and the promotion of monasticism in late antiquity.

Focusing on devotional practices, Daniel Caner draws together diverse testimony from Egypt, Syria, Asia Minor, and elsewhere-including the Pseudo-Clementine Letters to Virgins, Augustine's On the Work of Monks, John Chrysostom's homilies, legal codes-to reveal gospel-inspired patterns of ascetic dependency and teaching from the third to the fifth centuries. Throughout, his point of departure is social and cultural history, especially the urban social history of the late Roman empire. He also introduces many charismatic individuals whose struggle to persist against church suppression of their chosen way of imitating Christ was fought with defiant conviction, and the book includes the first annotated English translation of the biography of Alexander Akoimetos (Alexander the Sleepless). Wandering, Begging Monks allows us to understand these fascinating figures of early Christianity in the full context of late Roman society.