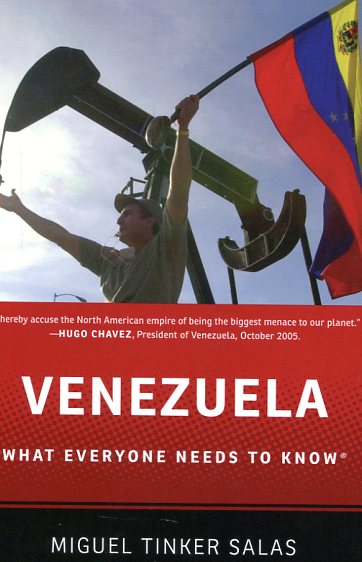 Venezuela
what everyone needs to know

Among the top ten oil exporters in the world and a founding member of OPEC, Venezuela currently supplies 11 percent of U.S. crude oil imports. But when the country elected the fiery populist politician Hugo Chavez in 1998, tensions rose with this key trading partner and relations have been strained ever since. In this concise, accessible introduction, Miguel Tinker-Salas-a native of Venezuela who has written extensively about the country-takes a broadly chronological approach to the history of Venezuela, but keeps oil and its effects on the country's politics, economy, culture, and international relations a central focus. After an introductory section that discusses the legacy of Spanish colonialism, Tinker-Salas explores the "The Era of the Gusher," a period which began with the discovery of oil in the early 1910s, encompassed the mid-century development and nationalization of the industry, and ended with a change of government in 1989 in response to widespread protests. Tinker-Salas also provides a detailed discussion of Hugo Chavez-his rise to power, his domestic, political and economic policies, and his high-profile forays into international relations. Arranged in helpful question-and-answer format that allows readers to search topics of particular interest, the book covers such questions as: Who is Simon Bolivar and why is he called the George Washington of Latin America? How did the discovery of oil change Venezuela's relationship to the U.S.? What forces were behind the coups of 1992? Does Chavez really want to be president for life? How does Venezuela interact with China, Russia, and Iran? And much more. Convenient, engaging, and written by a leading expert on the country, Venezuela: What Everyone Needs to Know offers a lively look at an increasingly important player on the world stage.