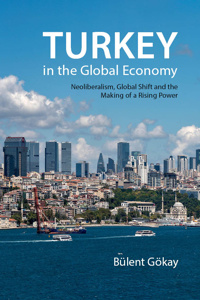 Turkey in the global economy
neoliberalism, global shift, and the making of a rising power

Since the late-1990s Turkey has emerged as a significant economic power. Never colonized and straddling the continents of Europe and Asia, it plays a strategically important role in a region of increasing instability.

Bülent Gökay examines Turkey’s remarkable domestic political and economic transformation over the past two decades within the context of broader regional and global changes. By situating the story of Turkey’s economic growth within an analysis of the structural changes and shifts in the world economy, the book provides new insights into the functioning of Turkey’s political economy and the successes and failures of its ruling party’s economic management.

Part I Global shift and the world economy
1. An emerging market economy
2. The Turkish economy in the twentieth century

Part III The AKP 2: authoritarian neoliberalism
6. The global financial crisis and Turkey’s response
7. Turkish foreign policy: the Arab Spring and the Syrian catastrophe
8. The Taksim Gezi protests and the authoritarian turn
9. The 2016 failed coup and crackdown

Part IV The crisis of global hegemony
10. The US–Turkey stand-off, trade wars and new partners
11. Turkey and uncertain predictions for the world economy
12. The Covid-19 pandemic
13. Towards a conclusion: some key trends

The fall of the US Empire