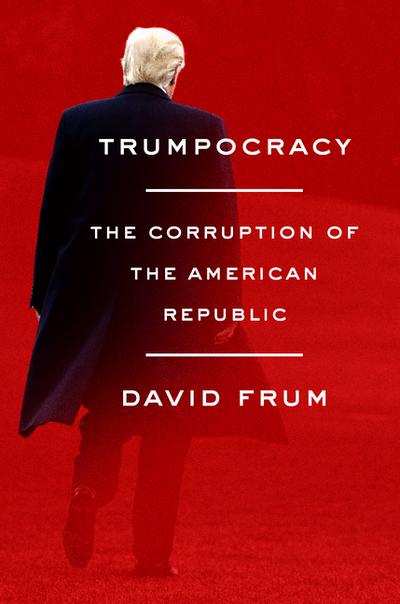 Trumpocracy
the corruption of the american republic

As the President of the United States, Donald Trump continually voices admiration for brutal strongmen such as Russia's Vladimir Putin, the Philippines' Roderigo Duterte, Turkey's Recep Tayyip Erdogan, and Egypt's Abedel Fattah el-Sisi. He has threatened the American mainstream media, obsessed over leaks, and worked mostly through executive orders. Some Americans still believe this is part of a carefully crafted plan to bring authoritarianism to our country. As Frum reveals, carefully crafted or not, this is where Trump is taking us. In this thoughtful and hard-hitting book, he issues a warning for democracy and America's future: all over the world countries are being destroyed by similar populist bumblers, making impulsive decisions and ignoring traditions,

Quietly, steadily, he and his administration are damaging the tenets and accepted practices of American democracy, perhaps irrevocably. As Trump and his family enrich themselves, the presidency itself falls into the hands of the generals and financiers who surround him.

During his own White House tenure, Frum witnessed the ways the presidency is limited not by law, but by tradition, propriety, and public outcry, all now weakened. Whether the Trump presidency lasts 2, 4, or 8 more years, he has changed the nature of the office for the worse, and likely for decades.

In this powerful and eye-opening book, Frum makes clear that the hard work of recovery starts at home. Trumpocracy outlines how Trump could push America towards illiberalism, what the consequences could be for our nation and our everyday lives, and what we can do to prevent it.