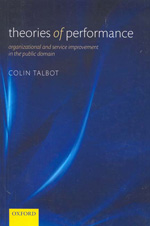 Theories of performance
organizational and service improvement in the public domain

How well do governments do in converting the resources they take from us, like taxes, into services that improve the well-being of individuals, groups, and society as a whole? In other words: how well do they perform? This question has become increasingly prominent in public debates over the past couple of decades, especially in the developed world but also in developing countries. As the state has grown during the second half of the 20th century, so pressures to justify its role in producing public services have also increased. Governments across the world have implemented all sorts of policies aimed at improving performance. But how much do we know about what actually improves performance of public organisations and services? On what theories, explicit or more often implicit, are these policies based? The answer is: too much and too little. There are dozens of theories, models, assumptions, and prescriptions about 'what works' in improving performance. But there's been very little attempt to 'join up' theories about performance and make some sense of the evidence we have within a coherent theoretical framework. This ground-breaking book sets out to begin to fill this gap by creatively synthesising the various fragments and insights about performance into a framework for systematically exploring and understanding how public sector performance is shaped. It focuses on three key aspects: the external 'performance regime' that drives performance of public agencies; the multiple dimensions that drive performance from within; and the competing public values that frame both of these and shape what public expects from public services.