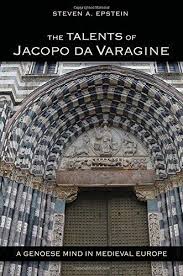 Jacopo da Varagine (c. 1228 1298) is remembered today primarily for his immensely popular work, The Golden Legend, a massive collection of stories about the saints. Compiled over the years 1260-67, The Golden Legend quickly eclipsed earlier collections of saints lives. One indication of its popularity is the fact that so many manuscript copies of the work have survived more than one thousand according to some estimates. Despite the enduring influence of The Golden Legend, Jacopo remains an elusive figure because he left behind so little information about himself.

In The Talents of Jacopo da Varagine, Steven A. Epstein sets out to remedy this situation through a careful study of all Jacopo's works, including many hundreds of sermons and his innovative chronicle of Genoese history. In Epstein's sure hands, Jacopo emerges as one of the most active and talented minds of his day. Indeed, Epstein argues that one needs to read all of Jacopo s books, in a Genoese context, in order to understand the original scope of his thinking, which greatly influenced the ways generations of people across Europe experienced their Christianity. The rich sources for Jacopo's sermons, saints lives, and history illuminate the traditions that inspired him and shaped his imaginative and artistic powers.

Jacopo was also one of the inventors of social history, and his writings reveal complex and new perspectives on family life as well as the histories of gay people, slaves, Jews, and the medieval economy. Filled with impressive insights into the intellectual life of the Thirteenth Century, The Talents of Jacopo da Varagine will be of interest to a wide range of medieval scholars and students of religious history, church history, and hagiography as well as intellectual history and Italian history.

An economic and social history of Later Medieval Europe, 1000-1500

The medieval discovery of nature