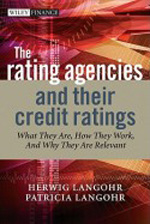 The rating agencies and their credit ratings
what they are, how they work, and why they are relevant

Credit rating agencies play a critical role in capital markets, guiding the asset allocation of institutional investors as private capital moves freely around the world in search of the best trade-off between risk and return. However, they have also been strongly criticized for failing to spot the Asian crisis in the early 1990s, the Enron, WorldCom and Parmalat collapses in the early 2000s and finally for their ratings of subprime-related structured finance instruments and their role in the current financial crisis. This book is a guide to ratings, the ratings industry and the mechanics and economics of obtaining a rating. It sheds light on the role that the agencies play in the international financial markets. It avoids the sensationalist approach often associated with studies of rating scandals and the financial crisis, and instead provides an objective and critical analysis of the business of ratings. The book will be of practical use to any individual who has to deal with ratings and the ratings industry in their day-to-day job. Reviews: 'Rating agencies fulfill an important role in the capital markets, but given their power, they are frequently the object of criticism. Some of it is justified but most of it portrays a lack of understanding of their business. In their book The Rating Agencies and their Credit Ratings, Herwig and Patricia Langohr provide an excellent economic background to the role of rating agencies and also a thorough understanding of their business and the problems they face. I recommend this book to all those who have an interest in this somewhat arcane but extremely important area' - Robin Monro-Davies, Former CEO, Fitch Ratings. 'At a time of unprecedented public and political scrutiny of the effectiveness and indeed the basic business model of the Credit Rating industry, and heightened concerns regarding the transparency and accountability of the leading agencies, this book provides a commendably comprehensive overview, and should provide