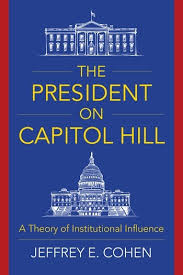 The president on Capitol Hill
a theory of institutional influence

Can presidents influence whether Congress enacts their agenda? Most research on presidential-congressional relations suggests that presidents have little if any influence on Congress. Instead, structural factors like party control largely determine the fate of the president’s legislative agenda. In The President on Capitol Hill, Jeffrey E. Cohen challenges this conventional view, arguing that existing research has underestimated the president’s power to sway Congress and developing a new theory of presidential influence.

Cohen demonstrates that by taking a position, the president converts an issue from a nonpresidential into a presidential one, which leads members of Congress to consider the president’s views when deciding how to vote. Presidential position taking also converts the factors that normally affect roll call voting—such as party, public opinion, and policy type—into resources that presidents can leverage to influence the vote. By testing all House roll calls from 1877 to 2012, Cohen finds that not only do presidents have more influence than previously thought, but through their influence, they can affect the substance of public policy. The President on Capitol Hill offers a new perspective on presidential-congressional relations, showing that presidents are not simply captives of larger political forces but rather major players in the legislative process.

The presidency in the era of 24-hour news