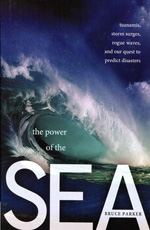 The power of the sea
tsunamis, storm surges, rouge waves, and our quest to predict disasters

Classics from Moby Dick to A Perfect Storm have sought to capture mankind's obsession with the might and the mystery of the sea. And the greatest minds for centuries, including Isaac Newton, Napoleon, and Benjamin Franklin, have worked to understand and predict when its next act of destruction will occur. The awesome power of the earth's oceans have been at the forefront of everyone's minds in recent years, from the 2004 Indian Ocean Tsunami (230,000 dead) to the devastation of New Orleans after Hurricane Katrina to the unknown consequences of the melting of thousands of glaciers as the Earth's temperature slowly rises. Bruce Parker, former Chief Scientist for the National Ocean Service, brings together the breathtaking history of man's relationship with the sea with the latest scientific breakthroughs to explore in this wide-sweeping, fascinating narrative: * Napoleon's realization about what happened to Moses in the Red Sea after his own narrow escape from it's dangerous tides * The important role the tides played in assuring the Allied victory on D-Day, and how a typhoon decided a key naval battle in the Pacific theater * How in 1970 the country of Bangladesh claimed it's independence following a deadly storm surge that claimed half a million lives * A 500-foot tsunami (the largest in recorded history) that carried three fishing boats from a quiet bay in Alaska in the 1950s to middle of the Pacific Ocean - and two men survived to tell the tale. * How a ten year old English girl saved the lives of hundreds during the 2004 Indian Ocean tsunami * How today's scientists are working to predict the sea's next move through a vast global array of oceanographic sensors - on buoys, on ships, on islands, along coasts, and on satellites that provide huge quantities of real-time data to scientists in the international community. This is a richly textured narrative that takes readers through over a thousand years of the ocean's uncompromising role in mankind's fate, gripping s