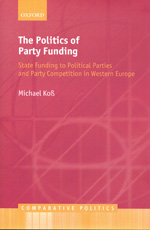 Recently there has been a convergence of party funding regimes across many states of Western Europe. The driving force behind this process has been the introduction of state funding to political parties. This book subsequently asks why state funding to political parties has been introduced in ever more countries and yet there still remain some places where it has only been introduced to a decidedly limited degree? It argues that a consensus of the relevant parties is a prerequisite for the introduction of state funding, thereby assuming a nexus between particular forms of party competition and the outcome of party funding reforms. The author shows how the introduction of state funding is more likely to occur in countries where parties have a high number of institutional veto points at their disposal, where both policy- and office-seeking play a more important role in parties' strategic preferences than vote-seeking, and where the discourse on political corruption identifies state funding as a remedy against corrupt practices. These assumptions are confirmed for four cases: Germany, Sweden, the UK, and France. He argues that two constellations of independent variables facilitate the introduction or reform of state subsidies. On the one hand, in political systems that provide parties with a considerable number of veto points, vote-seeking generally plays a minor role in decisions about party funding. On the other hand parties can reach a consensus independently of the institutional environment and their strategic preferences by engaging in the discourse on political corruption. Decreasing levels of ideological polarisation prior to the introduction of state funding imply that causal mechanisms similar to the ones identified in the four case studies are at work in established democracies in Western Europe more generally. Thus, the book represents a first step towards a theory which explains differences and similarities in party funding regimes.