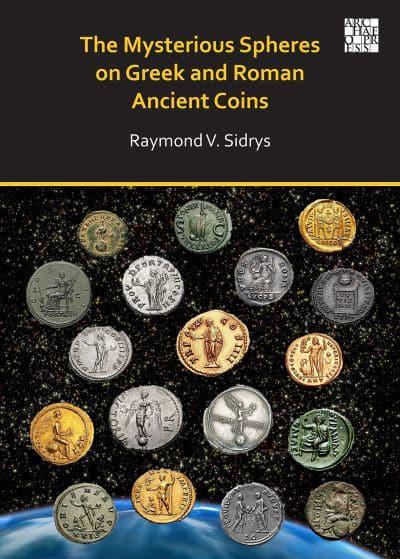 The mysterious spheres on Greek and Roman Ancient coins

This book is not a standard coin catalogue, but it focuses on quantities and percentages of the mysterious 5950 sphere images on Roman (76BC-AD 476) coin reverses, and a few Greek coins. This research identifies which Emperors, Deities and Personifications are most frequently shown with a sphere, during reigns and eras, and determines the political, cultural, religious and propaganda trends associated with the coin sphere images, and provides a variety of new findings. The book has 257 illustrations of spheres shown on Roman and a few Greek coins, as well as 109 images of statues, reliefs, mosaics, and other ancient art. Consider that the ancient Greeks (620 BC-30 BC) had the first astronomers in Europe (influenced by Egyptian and Babylonian astronomy) who created the celestial and terrestrial sphere theories, including the popular geocentric theory (Earth is the centre of the Universe). But at that time the Greeks very rarely showed sphere images on their coins - far less than 1%! In comparison, the later Romans during 76 BCAD 476 issued coin reverse sphere types as 15% of their total coin types, and therefore millions of these important coin sphere types were minted. The author explores Constantine's BEATA TRANQVILLITAS Sphere Reverses (AD 321 - 324) and offers a new interpretation of Christian Trinity symbolism that opposes Arianism. Starting in the late 4th century, the Roman religion began to transfer to Christianity, and coins promoted Emperors holding a Christian cross on a globe or a winged Victory/Angel also holding a globus cruciger. At the end of the book, the Epilogue shows the continuous worldwide use (from 5th to 21st century) of sphere images on coins, reliefs, sculptures, astronomical models, drawings, paintings and large monuments, and some of them suggest that Imperial Roman sphere coins created a long legacy.