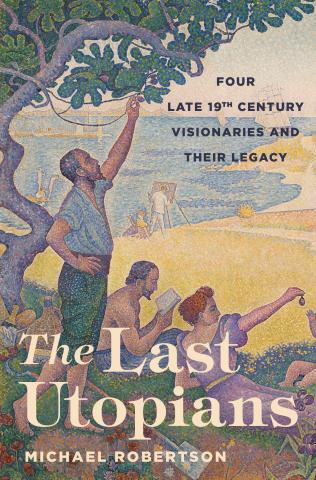 For readers reared on the dystopian visions of Nineteen Eighty-Four and The Handmaid's Tale, the idea of a perfect society may sound more sinister than enticing. In this lively literary history of a time before "Orwellian" entered the cultural lexicon, Michael Robertson reintroduces us to a vital strain of utopianism that seized the imaginations of late nineteenth-century American and British writers.

The Last Utopians delves into the biographies of four key figures--Edward Bellamy, William Morris, Edward Carpenter, and Charlotte Perkins Gilman-who lived during an extraordinary period of literary and social experimentation. The publication of Bellamy's Looking Backward in 1888 opened the floodgates of an unprecedented wave of utopian writing. Morris, the Arts and Crafts pioneer, was a committed socialist whose News from Nowhere envisions a workers' Arcadia. Carpenter boldly argued that homosexuals constitute a utopian vanguard. Gilman, a women's rights activist and the author of "The Yellow Wallpaper," wrote numerous utopian fictions, including Herland, a visionary tale of an all-female society.

These writers, Robertson shows, shared a belief in radical equality, imagining an end to class and gender hierarchies and envisioning new forms of familial and romantic relationships. They held liberal religious beliefs about a universal spirit uniting humanity. They believed in social transformation through nonviolent means and were committed to living a simple life rooted in a restored natural world. And their legacy remains with us today, as Robertson describes in entertaining firsthand accounts of contemporary utopianism, ranging from Occupy Wall Street to a Radical Faerie retreat.