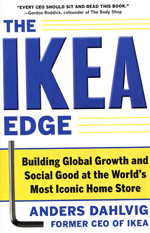 IKEA's former CEO reveals the unique strategy he used to lead his company to profit and growth through the worst global financial crisis in history "Every CEO should sit and read this book and then reflect before it is too late." --Gordon Roddick, cofounder of The Body Shop With Anders Dahlvig at the helm from 1999-2009, IKEA enjoyed unprecedented success. The furniture giant averaged 11% yearly sales growth and annual operating profits in excess of 10%. The company hired more than 70,000 new employees and opened new stores in the emerging markets of Eastern Europe, Asia, and the Middle East. All this in the midst of a global recession that hit the retail furniture industry particularly hard. The IKEA Edge reveals the strategy Dahlvig used to thrive in both good and bad times--a combination of traditional business goals like profit and growth and the progressive interests of social responsibility and environmental stewardship. Dahlvig proves that these objectives, which are usually viewed as opposites, are not only compatible, but can work in harmony to benefit the organization, employees, customers, and the world at large. Anders Dahlvig is the former president and CEO of IKEA. He received the Swedish award for Good Environmental Leadership in 2002 for his independent and persistent work with environmental sustainability issues.