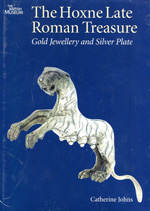 The Hoxne treasure, a spectacular collection of gold and silver coins, gold jewellery and silver artefacts, was buried early in the 5th century AD, and was rediscovered in November 1992. Although the major objects have been exhibited in museums and illustrated and discussed in both popular and scholarly publications over the last fifteen years, the results of detailed research on the entire find are published here in full for the first time. This volume provides a complete, illustrated inventory of the items in the treasure other than the 15,000 coins, which have been separately published (in "The Late Roman Gold and Silver Coins from the Hoxne Treasure", by P.S.W. Guest, British Museum Press, 2005). It catalogues the 29 superb pieces of gold jewellery, a dozen silver vessels, nearly a hundred silver spoons, and about 40 additional silver objects. The numerous objects made of organic materials (ivory, bone and wood), though individually small, are rare discoveries, and the iron nails and other fittings bear witness to the chest that originally contained the treasure: all are described in detail, bringing the total to just over 400 entries. Fifteen chapters of wide-ranging discussion include specialist contributions on the excavation, conservation and scientific study and analysis of the material, and the identification and interpretation of the inscriptions. Together they place this outstanding find both in its immediate environment of late Romano-British society and in the wider context of the art, iconography and luxury of the late Roman world.