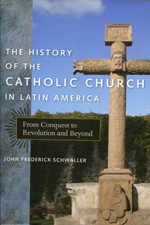 One cannot understand Latin America without understanding the history of the Catholic Church in the region. Catholicism has been predominant in Latin America and it has played a definitive role in its development. It helped to spur the conquest of the New World with its emphasis on missions to the indigenous peoples, controlled many aspects of the colonial economy, and played key roles in the struggles for Independence. The History of the Catholic Church in Latin America offers a concise yet far-reaching synthesis of this institution's role from the earliest contact between the Spanish and native tribes until the modern day, the first such historical overview available in English. John Frederick Schwaller looks broadly at the forces which formed the Church in Latin America and which caused it to develop in the unique manner in which it did. While the Church is often characterized as monolithic, the author carefully showcases its constituent parts - often in tension with one another - as well as its economic function and its role in the political conflicts within the Latin American republics. Organized in a chronological manner, the volume traces the changing dynamics within the Church as it moved from the period of the Reformation up through twentieth century arguments over Liberation Theology, offering a solid framework to approaching the massive literature on the Catholic Church in Latin America. Through his accessible prose, Schwaller offers a set of guideposts to lead the reader through this complex and fascinating history.