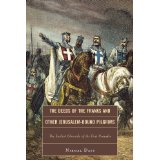 This new translation offers a faithful yet accessible English-language rendering of the twelfth-century Gesta Francorum et aliorum Hierosolomitanorum, the earliest known Latin account of the First Crusade. Although an anonymous work, it has become the exemplar for all later histories and retellings of the First Crusade. As such, it is filled with vivid descriptions of the hardships suffered by the crusaders, with deeds of personal heroism, with courtly intrigues, with betrayal and cowardice, and with a relentless faith that would see the attainment of the desired goal: the capture of Jerusalem by the crusaders in 1095. There is a great deal of mystery surrounding this anonymous account, especially in regard to its authorship; place, date, and purpose of composition; narrative methodology; and point of view. It is also a sweeping tale that swiftly moves from the first preaching of the crusade by Pope Urban II, to the ragtag and ultimately doomed effort of the popular People's Crusade, and then the more disciplined and concerted campaign by the French and Norman nobility that led to the conquest of the Holy Land by the crusaders. Based on the latest scholarly research, including a substantive introduction that explores the questions surrounding the Gesta and its historical context, this definitive translation will bring the First Crusade and its era to life for all readers.