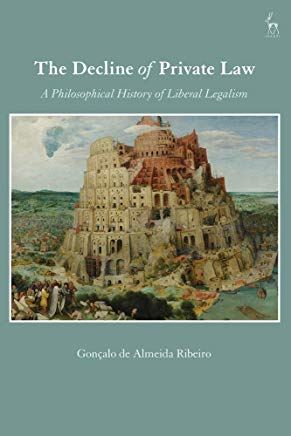 The decline of private law
a philosophical history of liberal legalism

This book is a large-scale historical reconstruction of liberal legalism, from its inception in the mid-nineteenth century, the moment in which the jurists forged the alliance between political liberalism and legal expertise embodied in classical private law doctrine, to the contemporary anxiety about the possibility of both a liberal solution to the problem of political justification and of law as a respectable form of expert knowledge. Each stage in the history is a moment of synthesis between a substantive and a methodological idea. The former is the liberal political theory of the period, purporting to provide a solution to the problem of political justification. The latter is a conception of legal method or science, supposedly vindicating the access of the expert to the political choices embodied in the law. Thus, each moment in the history of liberal legalism integrates a political theory with a jurisprudential conception. Although it reaches the unsettling conclusion that liberal legalism has largely failed by its own standards, the book urges us to avoid quietism, scepticism or cynicism, in the hope that a deeper understanding of the fragility of our values and institutions inspires a more thoughtful, broadminded and nurtured citizenship

1. The Idea of Political Liberalism
I. The Liberal Hypothesis
II. Majoritarian Government
III. Democratic Legitimacy
IV. The Trouble with Majoritarianism
V. Reasonable Pluralism
VI. Freestanding Principles
VII. Politics and Justice
VIII. Political Liberalism
IX. Pluralism within Liberalism
2. Kant and the Will Theory
I. Why Kant?
II. Kant's Moral System
III. Moral Value in the Groundwork
IV. The Nature of Recht
V. The Rightful Condition
VI. Private Right
VII. The Will Theory
VIII. Norm and Exception
3. The Rise of Classical Private Law
I. From Theory to Ideology
II. Reception of the Will Theory
III. Rise and Decline of Iurisprudentia
IV. Modern Legal Science
V. The Savignian System (i): Substance
VI. The Savignian System (ii): Method
VII. The Triumph of Formalism
VIII. Classical Private Law
4. The Socialisation of Private Law
I. The Social Question
II. The Social Jurists
III. The Emergence of Social Law
IV. The Social in Private Law
V. The Critique of Formalism
VI. Teleological Jurisprudence
VII. Culpa in Contrahendo
VIII. Abuse of Rights
5. The Politicisation of Private Law
I. On 'Legal Realism'
II. The Collapse of Private/Public
III. Confl icting Considerations
IV. Rules and Principles
V. The Indeterminacy of Doctrine
VI. The Indeterminacy of Rules
VII. The Indeterminacy of Grounds
VIII. Ideology in Private Law