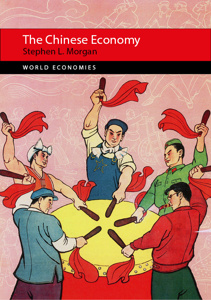 China’s transformation over the past four decades has been unprecedented. The vision of its leaders for the next three decades is unprecedented too, as China seeks to fashion an advanced economy without significant political and social liberalization.

Stephen Morgan provides a wide-ranging examination of China’s remarkable economic history from the time of the great divergence to the present day. Alongside the familiar story of GDP growth, he considers a comprehensive range of issues, including business management, energy use, foreign direct investment, government, innovation and consumerism as well as social and demographic factors such as social networks, health, education and migration and their interlinked challenges for the Chinese state. The specifics of development are examined – capitalism from above and below and its regional variances – as well as notable consequences, including growing inequality and severe pollution. The book also assesses the challenges to China’s continued growth, including its ageing and shrinking workforce (and rising dependency ratio), the constraints on innovation and raising productivity, as well as its ambitious international plans.

The book provides an accessible and authoritative survey of China’s recent economic history and the workings of its unique political economy suitable for courses in Asian business and economy, Chinese history and East Asian studies.